Yep, those are my favorite types of books and movies, swashbuckling adventure. I couldn’t get enough when I was younger. Top of the list was Dumas’ The Three Musketeers. Being so captivated, I took up fencing with the rapier. While other girls daydreamed about being swept away by Prince Charming, I imagined fighting with D’Artagnan and the Musketeers. As a result, I started writing my own swashbuckling story The Huguenot Sword when I was sixteen years old.

Being Christian from a Protestant background, I chose to tell a story from that side as all the books I read were from the Catholic perspective. However, when I researched 17th Century France, I found a new and deeper appreciation for the Huguenots – as the French Protestants were called. The most prominent Huguenot at the time was, Henri, the Duc de Rohan, a man of great moral strength, faith and courage. Sadly, he is little mentioned in history.

The term “Huguenot” was actually a derogatory term as the French Catholics purposely mispronounced the German word eidgenosse – which “means sworn companion”.  The Huguenots followed the teachings of John Calvin. The trouble began with Henry Navarre, who became King Henry IV of France. No, I didn’t misspell his name, as he spelled it with a “y” instead of “i”. Henry’s ascension to the throne placed the House of Bourbon in control of France.

Henry’s mother, Jeanne d’Albert the Queen of Navarre, was a strong-minded woman and staunch Huguenot and raise her son in the Protestant faith. One of the most profound and outrageous acts of religious intolerance happened a couple of months after Henry married Margaret of Valois – the St. Bartholomew’s Day Massacre. Thousands of Huguenots visiting Paris for the wedding where killed in the streets, and thousands more across France in the days that followed. This set off a series of religious wars in France.

In 1589, Henry Navarre became Henry IV of France, but accepting the throne meant converting to Catholicism. Being pragmatic, Henry believed this would help to unify France and even issued the Edict of Nantes in 1598 ensuring religious freedom and autonomy to the Huguenots. Unfortunately, that did little to mend the hearts and minds of many of his Huguenot compatriots, who felt betrayed by his decision. Among those was his younger cousin, Henri de Rohan, whom he made duke and peer for loyal and faithful service in 1603.

Henry showed great favor to his cousin, and Rohan became very influential at Court and the presumptive leader of the Huguenots. He forgave Henry of his conversion and diligently sought to keep peace between the Court and Huguenots.  Upon Henry’s assassination in 1610, Rohan turned his attention, loyalty and support to the young son and heir, nine-year-old Louis. However, his loyalty became sorely tested by Queen Marie and her favorite bishop turned Cardinal – Richelieu.

Marie worked fast to undermine everything Henry did to give the Huguenots freedom and authority. Richelieu took a more measured approach in reducing the power and presence of the Huguenots since many of the princes and peers of France were Huguenots. Rohan’s fortitude, courage and faith made him the perfect rival and counter to Richelieu.  It is said that the great Cardinal feared Rohan, for the Duke’s family connections stretched across the monarchies of Europe including the powerful Hapsburgs of Germany and King Charles of England.

Even during the fateful siege of La Rochelle, Rohan never waivered in his loyalty to Louis. Alas, Marie and Richelieu’s influence worked, and the Huguenots were driven to near extinction in France. Yet even then, Rohan’s resilience and moral fiber would not let him fail those loyal to the Huguenot cause. When Richelieu offered an olive branch in the form of the Edict of Grace, pardoning all Huguenots for rebellion, it came with one condition – Rohan’s permanent exile from France.  The Duke accepted the condition and did as bade, retiring to Venice.

In an ironic twist of fate, years later, Richelieu would call upon Rohan to aid France as military commander in the Val Telline campaign. Rohan died in the battle of Rhienfelden defending the country he loved but that exiled him for his faith. Even in death, Richelieu still feared Rohan’s influence and forbade the return of his body for burial. Thus, the great Huguenot leader, a man of staunch faith, lies in state in Geneva. 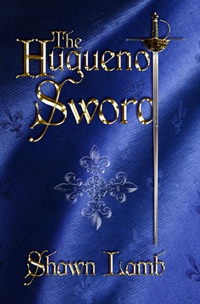 Shawn Lamb’s book the Huguenot Sword is available in both eBook and Paperback – For more information about her writing, her books and how to purchase please follow this link: http://www.allonbooks.com/huguenot_sword.html

2 thoughts on “A Good Old-Fashion Swashbuckler! by Author Shawn Lamb”