But that’s a British autumn for you, and the strawberry plants some friends kindly gave us are just loving the rain since I’ve put them in the vegetable patch so there is always a win somewhere 😉 That being said, I do have some beautiful autumn pictures from a walk I went on a  few weeks back which I’ve put in this post. 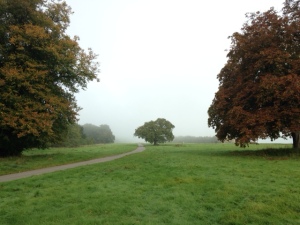 Changing seasons puts me in mind of where I am with my writing at the moment. I’m changing projects. I don’t know if other writers find this, but changing projects is something I find really difficult. It’s like you’ve been cruising around in 5th gear for ages, working on the same novel, honing it, polishing it, and at the end it all seemed to become rather easy, then you think, I’ll put it down for a bit. What’s next? Well for me, it’s putting down my fantasy, working title The Edict, and changing gear by going back to a historical romance I wrote a few years ago which I want to edit and get ready to send off to my publisher so they can tell me what they think.

That’s like putting the clutch in, pulling out of 5th and into 1st, and suddenly the engine breaking kicks in, the car is groaning and working on overdrive trying to maintain the speed it had before, and where am I? Struggling along at 10 miles per hour, struggling to gain traction on these wet autumnal roads and just trusting, that if I push through hard enough, I’ll start moving up the gears again.

Everyone works differently when it comes to writing. That’s what makes such a wonderful variety of things for everyone to read. For me, although I never like to clear-cut my writing process because it sucks my creativity, I would say I tend to write a very rough first draft, put it away for 6 months, come back to it, re-read it first without doing anything to it, and then go into editing mode.

It’s the re-reading that really gets me. My friend M.M. Bennetts told me to do it and I find it so helpful. I usually fall in love with my characters all over again, enjoy the plot-line, see scenes I forgot I wrote, and avoid with a screeching swerve the many grammatical errors that riddle the manuscript. But this time has definitely been tougher.

I guess it might be switching genres. I’ve been writing in the genre of historical fiction for about four years without much of a change in scenery except now and then. So to switch to fantasy, to get my head around the larger bulk of writing, the multiple plot-lines and creating your own world’s rules, however much fun, actually took my brain a lot of time to get the hang of. Now suddenly, I’m like, ‘Brain! Switch back, go back to the rules of the 18th Century, change style, get enthused about this period you love so much again.’

It’s not like I don’t love both genres. I do, I really do, but this change in gear, particularly this time, is definitely feeling like a clunkety-clunk shift. In fact, the way I got through reading the rest of the historical romance manuscript whose working title is Fool Me Twice, was to take a bath with nothing but the manuscript to read. It’s like creating a bubble-filled prison until the work is done…okay, it’s not much of a hardship and it does work! This morning I’ve finished the re-read and I’m ready to go up a gear into editing.

Changing writing projects can be like changing seasons. It can feel exciting at first, with that crispness of something new, the crunch of a new challenge, and the sunrise of new purpose, and then sometimes you get a few rainy days. But the rain won’t last. 5th gear here I come.