I’ve also left a piece of my heart in Cornwall, so apparently I’m becoming rather careless over the article, but those are the only two places as of yet. It takes something spectacular to capture a piece of my heart, there are certain criteria that need to be met, and writing them down in this blog post will not do my feelings justice, but I shall carry on nonetheless.

It needs to take my breath away, and no, not some over-the-top hyperbole, but physically leave me forgetting to take a breath because I’m so awe-struck. That’s the second criteria, awestruck. I want to stand before a country that leaves me standing in awe of its beauty. A country that makes me realise my own insignificance, which leaves me in awe of it’s creation, which sends my mind on a myriad of paths considering all those who have lived in this wild and desolate place.

It also needs to set every fibre of my writing mind to tingling until my imagination is darting here and there with concepts and characters. Where my favourite heroine could live at the foot of that ridge, or where my hero could ride down the narrow rocky tracks. Or even where a mighty battle could take place, because they have, in real life, taken place on these very grounds, and now they do again in my mind. 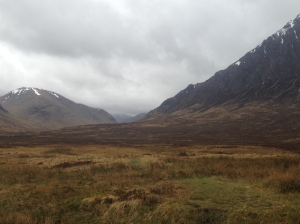 It needs to be a place in which I would be happy, joyful even, to become lost. Somewhere I could disappear into and be content to roam forever, (provided there was coffee available, obviously, in fact, that’s what I’m drinking right now).

Finally, and most importantly, there has to be a sadness in leaving. I have wanted to travel to Scotland and visit the Highlands for years, and I finally got to go. It was the best holiday myself and my husband have ever had (I can vouch for the former’s opinion of that statement). Perhaps that’s a bizarre comment in light of the other places we have been, but the Highlands just captivated me, they captured me physically and emotionally in their presence. Whilst we were waiting in the airport to come home at the end of our break, all I could think was how much I wanted to stay, all I could feel were tinges of sadness that we had to leave that beautiful country behind and all the friendly people that inhabited it. I couldn’t stand forever in the shadow of Glencoe or on bleak Rannochmoor, or on the shores of the deep and mysterious Loch Ness. I had to go. 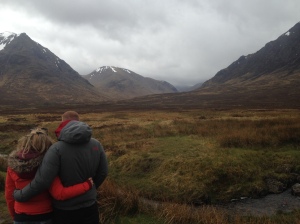 I want to go back, and that’s what I always say about Cornwall and the West Country where the wind whips along the coastline and the craggy cliffs are beaten by the relentless sea. It is clear, therefore, that another fragment of my heart has been left in the north of the United Kingdom, and I hold very little hope that I shall get it back.