I apologise unreservedly for being remiss in not posting last week. As I said in my last blog post, I was rather busy!

Anyhoo, the reason I am posting today is to give you a view of a wonderful little picture….Oh, have I got your interest? I hope so. I really hope so…is this time stalling working? Are you even more interested now?

Mwahahaha! Well, without further ado or annoyance, here is my full book cover with spine and blurb: 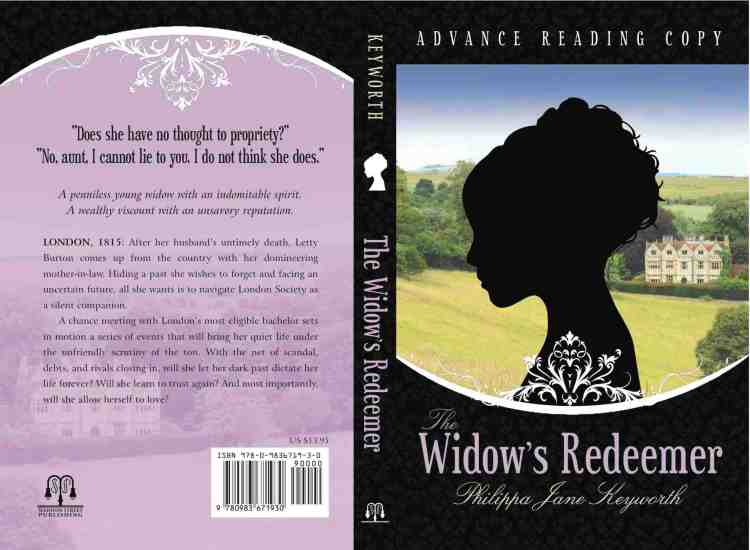 Isn’t it just lovely? Well, I am totally biased and of course, not everything will be everyone’s cup of tea but this, well this is definitely my cup of tea.

To make things doubly grand, I have also received my ARCs, otherwise known as Advanced Reading Copies which are the pre-proofed copies sent out to reviewers, and for the first time, I held my book in my hands:

It was quite amazing to hold it. I use the word amazing, and, unlike so many of my fellow humans, I don’t use it as an overstatement. At least I hope not. It was genuinely wicked to hold my own book in my hands. It’s several years work bound into several hundred pages and enshrined in the above cover. Just lovely. It makes writing even more enjoyable (if that’s possible).

And now I want to share something even more exciting with you. Not only do you get a few snaps of the cover and book, I also want to share an excerpt from it with you. Originally this blog post was doing to be about Regency etiquette but I was excited about showing you my cover and ARCs. So, I have decided to choose an exert about etiquette, or rather the lack of it, which features the main characters of The Widow’s Redeemer, Letty Burton and Viscount Beauford:

“Oh, come now, Mrs. Burton. Let us at least converse despite our unfortunate beginnings. I have it on good authority, from Major Deveril, that you are not looking for a husband. That, coupled with your non-arrogance, means we can at least make the most of each other’s company when attending the same parties, for, I believe, you are not the usual specimen of the opposite sex.”

“I do not know what the Major has been telling you.” She paused, holding in a retort, then she thought better of it. “I thank you for your praise, however improper you may sound, but I would rather spend my time in that dog’s company than yours.” She gestured to the fat lap dog on Mrs. Gray’s sofa that was observing them with its squished face. Widow and bachelor were mesmerized for a moment watching the owner and dog, both of whom were feeding themselves on treats. If they had been able to read each other’s thoughts they would have found their minds were on similar tracks—both thinking how alike the owner and the pet were.

Letty smiled a little, then looked away. The Viscount saw it and repeated his offer for conversation, but to no avail. She would not accept. She would not be the entertainment for some libertine when his bored tendencies felt so inclined. “No, thank you, you may save your conversation.”

“Really?” asked the Viscount, determined not to let his quarry get away. He leant onto his other foot to block her escape and smiled teasingly down at her. “But please tell me, what exact merits does the dog have that you favor him over myself?”

She gritted her teeth. She could not very well leave his company now without causing an unpleasant scene. Very well, if the Viscount would not let her go, perhaps she should become at least affable and converse with him for a moment. Though she had much rather bombard him with set downs, she knew such behavior was not good for her mother-in-law’s reputation—especially if he decided to snub them. Curse propriety and all its earthly shackles! She held back the biting remark she had on the tip of her tongue and smiled politely.

“That’s better. Have you decided to stay, young widow?” He spoke as if to a pet dog or horse, and Letty’s blood boiled within her. When her temper finally got the better of her, propriety’s shackles were broken beyond repair.

“The dog has better conversation than you, as he has none! Better manners, as he does not tend to bite one’s head off in anger! And the creature is in fact of jovial disposition and always ready to play, not subject to unpredictable flashes of rude temper!” Her cheeks flushed.

“Hmm, a fair prognosis. I salute you in your perception.” He carried on completely unshaken by her outburst; in fact, he almost seemed pleased she had just insulted him.

2 thoughts on “ARCs, Full Book Cover and a Juicy Excerpt!”